First release “Do The Grapevine” by DJ Farah Farz is OUT! 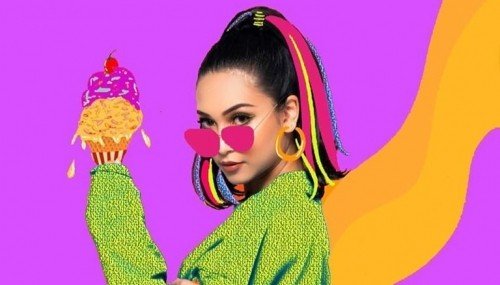 Singapore, 3rd July 2020 - If you’re an avid partygoer whose bulk of weekends consist of

club-hopping in search of the funkiest beats in town, it’s expected that you’d be

where she’s a resident DJ.

Inspired by a dance move of the same name, she has bass house fans in for a treat with her

first ever upcoming single, Do The Grapevine released on 1st July 2020. Her creation

spinning music of the same genre.

The track is described as dark, yet groovy with energetic elements, which is synonymous

with its producer’s brand; a wacky bubblegum mix of all things bold and colourful

After spending the past five years mixing and blending the tunes of other artists, Farah

Farz has decided to try her hand at making her very own unique sound. In 2019, she

embarked on this new adventure of music production which reaped today’s art. The result

is a song opening with resonant, bouncy beats which flow gradually into a harmonic

rhythm in the centre, while maintaining a consistently upbeat, hard-hitting tempo all the

way through. Here is where it begins building up to its climax before merging seamlessly

reminder to let loose and groove a little, even if times are seemingly hard”, said Farah. “We

can’t choose the tough times we face, but we can always choose to have fun.”

Conceived while Farah Farz was holidaying in Bali, this song really lives up to the values it

promotes, right down to its origins!

The accompanying music video has been choreographed to accurately translate the

track’s eclectic audio energy into a visually invigorating affair. Move Your Feet Like This

Overall, its quirky sights are a joy to behold.

Regarding her debut as a music producer, she wishes to see many more female artists

join the profession, just as how recent years have witnessed an influx of female DJs in a

once male-dominated industry. Hopefully, there will be more diversity in the near future.

such as Spotify, Apple Music, Deezer and Youtube on 1

Where to watch Do the Grapevine official music video?