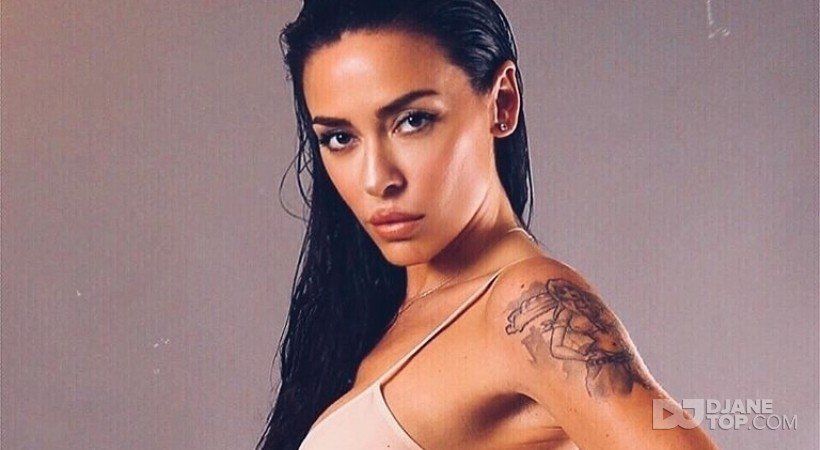 Laeticia De Valer was born in Sussex, England, but grew up in London, and spent her summers as a teen living in Ibiza. Coming from a family of seamstresses she grew up in and around fashion, designing her own clothes from aged 5. She began modeling at 13, when she landed her first magazine cover, shot my renowned photographer and academy award nominee Sean Ellis. She went on to shoot for various editorials such as Vogue and More Magazine, and landed major billboard campaigns, such as Top Shop, as well as acting in various indie films and commercials for MTV and The Graham Norton Show, also featuring in MTV reality show Ibiza Uncovered.
It was then she began writing poetry, which soon turned into a love for songwriting inspired by her favorite bands The Cure and The Smiths.
Her interests then moved into Hip Hop, where she would meet the late Proof, of Eminem’s D12. He became her mentor and she began she experimenting putting her poems to a beat. It was Proof who would then go on to give her the moniker “Misfit Dior”.
After being spotted during an impromptu performance at the UK Hip Hop awards, she was quickly signed to indie-label Street Dreams. She spent the next twelve months recording and performing, and was featured on various mix-tapes.

The following year she left London to pursue her dreams in New York City, settling into what would later become her permanent home in Williamsburg, Brooklyn. She continued her studies in acting at Susan Batson’s Black Nexxus, and was a regular at open mic nights in Harlem. She quickly grew her fan-base with the 2006 release of mix-tape Sex Sells and single Hey Boy which was featured during New York’s Mercedes Benz Fashion Week where she performed while working with Married To The Mob clothing.

Laeticia, at the time known as Misfit Dior, appeared on VH1’s music and reality based, “Ego Trip’s The White Rapper Show” to an overwhelming success of 4.4 million viewers first episode, which was rare at the time for that genre. Laeticia quickly became a fan favorite amongst viewers, and was featured in magazines such as Complex, New York Magazine, Inked, Misbehave and Metro Pop.

She went on to release singles and videos for, Miss America, Welcome Back Dior, Sexy Spectrum, Lovey Dovey and Mr Plastic, whilst featuring in cameo roles in hit movies including Sex and the City 2 and Premium Rush.
Still continuing her modeling, she landed billboard campaigns in Times Square and across Asia for B.U.M Equipment Clothing, and editorials for Bumble & Bumble, and most recently two campaigns for Nikon.

Laeticia has been featured in WWD.com, Rachel Roy’s The Life and Vogue.com, “Vintage Shopping With Misfit Dior”, written by renowned journalist Lynn Yaeger, and has regularly become a favorite among top fashion bloggers and enthusiasts.

As her newest project, the EP Gun Moll evolved to a more sultry sound, and became less about rap and more about her finding her voice as a singer/songwriter it seemed only natural to revert back to her real name “Laeticia De Valer.” As Gun Moll continued to take her on an artistic journey she decided to build her own studio in her Williamsburg apartment and teach herself how to sound engineer and produce, making this a truly independent project. Citing Jim Morrison, Portishead, The Cure and Massive Attack as influences, Gun Moll blends sultry & sexy vocals with trip-hop infused beats. The visual element was also important to Laeticia as she drew off her love of fashion, executive producing the video to the lead single Hitchcock Blonde, which was released April 2015. The dark cinematic tones & vintage style of the video were inspired by her obsession with the Hitchcock movies the Mid-Century era and Film Noir.
Hitchcock Blonde remix was released late 2015, produced by Toronto producers Rezza Brothers and My Dreams was released asa free download on her Soundcloud summer 2016.
Her latest video Hazel Eyes is set for release in February 2017, along with Gun Moll EP.

Laeticia also recently began DJ-ing, debuting her first gig in Toronto, Canada and has a weekly radio show The Tres Amigas where she hosts and DJ’s for DTF Radio.