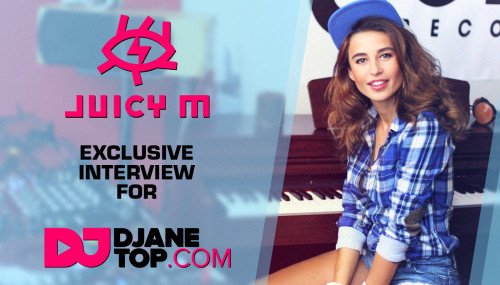 Today we are so pleased to present the interview of one of the most popular world’s DJ, artist of Armada Music label.

This Year #2 at TOP 100 Best World Female Djs by DjaneTop.com

Here you go - the interview with Juicy M. DJANETOP: Hello Marta! We are happy to interview you. But first of all, we would like to share our congrats as to your pregnancy and to wish strong health and wealth to your family. It’s a great pleasure to see your family pictures on the social networks.

Let’s proceed to the interview itself. Tell us please how did it come that you became a DJ and what was the starting point actually? Who was your teacher or was it a School for DJs?

Juicy M: When I was about 15 I went to a big festival for the first time and saw a DJ on the stage, one person who controls the mood of thousand dancers and drives them crazy, including me. There was something magical about it and that moment I've decided that I want to be a DJ and I went to DJ school. I actually was really lucky as my teacher at school was a heavyweight turntablist, a DMC regional champion for many years, who taught me how to scratch, play on the turntables like a pro and respect DJ skills. Juicy M: My first ever set was in a prime time at the one the best nightclubs in Kiev, Ukraine. I remember that I was trembling like hell, no matter how you think you well prepared - the first set is always damn scary!

DJANETOP: What is the most remarkable event during all your DJ career? Was there a gig that you would never like to remember?

Juicy M: From the latest, my most remarkable performance was at Medusa Festival in Spain. I played a sunrise set from 6 till 7 in the morning for 20,000 people. That was really awesome! DJANETOP: If we are not mistaken you began your career with hip hop and r&b styles, so what pushed you to change the music style?

Juicy M: In late 2012 I was performing at H2O festival in South Africa. I played on one of the smallest hip-hop stages and after my set, I went to the main stage to listen to Afrojack. Don't get me wrong, my stage had about 500 people and vibes were good, but it simply incomparable to the ocean of hands formed by thousands and thousands of people I saw on the main stage. And I just said to myself "Hell no, I wanna perform on the main stage here!" and it eventually brought me to EDM.

DJANETOP: Your awesome sensational video with 4CDJ already gained 20milions of views in YouTube. Did you expect such an incredible success?

Juicy M: I didn't expect anything at all. That was a time when I just switched from hip-hop to EDM and my manager asked me to do an online mix because all the promoters still were expecting me to play hip-hop and there was a problem. I don't remember why I have decided to do a video mix instead of audio, but it turned out to be a really good idea that started a whole movement of girls DJs doing this kind of mixes. I absolutely didn't expect that.

DJANETOP: Many djs criticize that video. What did you feel when you heard that comments? And how do you actually feel about critics connected to your personality and work in general?

Juicy M: Haters will always hate, I don't care. There are few people whose opinion I trust and they all say it's brilliant. DJANETOP: Your husband is your general manager. How do you like family business? Do you often have some argues as to working moments?

Juicy M: I think it's one of the main keys to our good relationships since we're traveling and support each other for 10 years now in all the arguments and all the success we have. DJANETOP: We used information from your official Facebook page while making your page at our website, that’s why we noted that you represent USA. As a result we had many claims regarding your representing Ukraine but not USA. We know that you live in LA and Barcelona , thought your are originally from Ukraine. Which country do you represent nowadays? If we were wrong we will change this information on our web site.

Juicy M: That's absolutely correct, I was born and raised in Ukraine and last four years I live in Barcelona during summer and Los Angeles in the wintertime. I actually was questioning myself the same question recently and I like the Wikipedia guide for musicians that defines an artist by country of origin and adds current location as notice. So I'm Ukrainian DJ, that currently live in Los Angeles. DJANETOP: A lot of female djs are afraid of getting pregnant and give birth to a child, thinking that kids can make a harm to career. Nevertheless, in your case with a child in your family, career made a new step to another level and gained more turnovers. What difficulties did you face getting a kid in your life? What advice can you give to future and present mommies DJs?

Juicy M: I consider my family and my career as equal parts of my life and I do my best to improve myself in these both parts - I study how to be a better parent as well as how to be a better DJ and producer. Unfortunately, there is no universal advice - yes, it's harder, but it's definitely not impossible.

DJANETOP: When is your and your husband’s second and the most important release planed? We mean birth of your child)

Juicy M: Our due date is the beginning of March. Might be the same day as our first one David, March 6. We're really looking forward to meeting our baby girl! DJANETOP: What feelings did you have while signing a contract with legendary Armada Music?

Juicy M: I was really really hyped, mainly because they pulled a lot of promises over on me.

DJANETOP: You have achieved a dream of most of  djs and performed at Tomorrowland last year. How was that? And what was your reaction when you had got a booking request to join this festival?

Juicy M: I felt like I got one step closer to my dream but I cannot say that I made it. I'll say that when I perform my closing set on the main stage. Nevertheless, it's still an amazing experience to be a part of Tomorrowland festival. DJANETOP: What plans do you have for future? When do you plan to start touring again?

Juicy M: I'm starting in early April with some gigs in the US and Canada and in May I'm coming back to Europe for the summer festival season. I'm very excited to come back on tour after my 6-month break.

DJANETOP: Would you like your kids to take after you and become djs also? We are sure such a family would give another Armin Van Buuren or another Jucy M to music world.

Juicy M: That would be cool if they decide to go this way, I'll definitely support them in their music careers. DJANETOP: What is the most that you like and dislike in your job?

Juicy M: In one word - traveling! It's the most exciting part as you're able to meet new people, new cultures and new places. And at the same time, it's the hardest and most stressful part with delays, overnight flights and missing your family.

DJANETOP: Beeing a DJ gives the opportunity to travel worldwide. Give us top 5 of your favorite cities. DJANETOP:  Which places would you like and actually plan to visit?

Juicy M: I'd love to go to Hawaii and New Zealand. Hopefully, this year.

DJANETOP: Who is the greatest musician for the last 100 Years in your opinion? Same question as to DJ.

Juicy M: The greatest ones are those who are writers and performers at the same time - Michael Jackson and Skrillex. DJANETOP: What advice can you give to djs who just begin their career?

DJANETOP: Thank you very much Juicy for this interview. We wish your family happiness and wealth. We are waiting for many new tracks and amazing performances.

Juicy M: Thanks for having me and stay tuned - new tracks are coming!