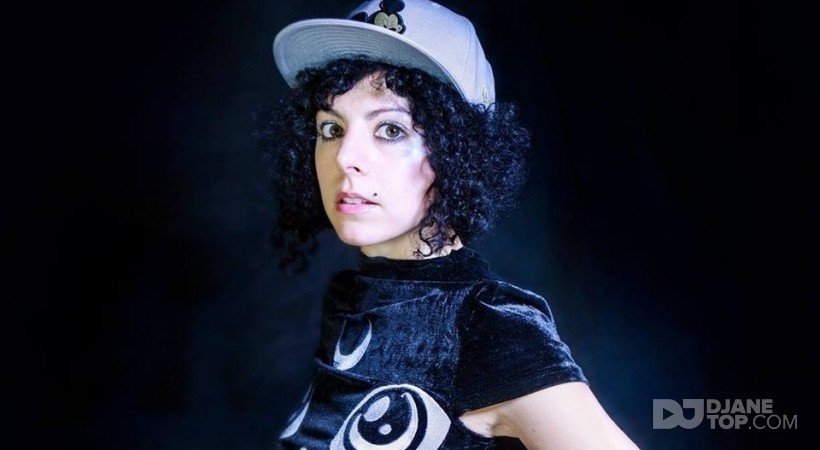 Born in Puglia, also known as the heel of Italy’s boot, Giorgia is a classically trained musician, composer and multi- instrumentalist. Very early on she developed a strong interest for electronic music and started to experiment with new live techniques. The solo project of Giorgia Angiuli stylistically moves between pop, techno and house. She uses her voice to create a dreamy dimension intensified by the use of unique toy instruments. During her set she combines keyboards, drum pad and theremin with the sounds of a toy flute, sax, trumpets and many other toys. Mixing all of these samples and loops she shapes a vibrating and energetic groove that sets the dance floor on fire.
From 2013 to the present Giorgia has had success releasing on some of the biggest labels, Stil vor Talent, Crosstown Rebels, Kindisch, Kevin Saunderson’s legendary techno KMS, Harry Klein, Einmusika, Systematic and Suara to name few. In 2018 she released her EP “No Body No Pain” and in the on the 23rd of November 2018 her debut album ‘In a Pink Bubble’, both on the label Stil Vor Talent. Her album “In A Pink Bubble” gained the attention of the press worldwide. A long series of premieres, articles and reviews followed this release. The album received positive reviews on Dj Mag Spain with 9.5/10 and on the German Faze Magazin with 10/10. Other articles were published on Dj Mag UK/worldwide, TRAX (France), Dj Mag Italy, Magnetic Magazine (USA), Electronic Groove, Attack Magazine (UK), Dj Mag (Mexico), Wired (Italy), Soundwall (Italy), LIFO (Greece), ClubbingSpain (Spain), on the Brazilian DJ Mag, Phouse, House Mag and on Radionica (Colombia)
When it comes to touring the globe, Giorgia is no stranger to the club scene. In 2013 when she began her solo project she started her residency at Tenax Club in Florence, Italy. Since then she has played at some of the most renown clubs in the world including Berghain in Berlin, Output in New York, Rex in Paris, Hive in Zürich, The Egg in London, Harry Klein in Munich, Studio in Essen, Nox in Madrid, Rex Club in Paris, Metro in Alicante, Privilege Ibiza, KaterBlau in Berlin, Sisyphos in Berlin, Watergate in Berlin, Wilde Renate in Berlin, Warung + D-Edge + Beehive + Club 88 in Brazil, Le Bataclan in Paris, Tanzhaus West in Frankfurt, Artel Bessonnica in Moscow, Amnesia in Ibiza, The Grand Factory in in Beirut, Input in Barcelona, Soho Garden in Dubai, Beit Maariv in Tel Aviv, De Marktkantine in Amsterdam, Oval Space in London, D! Club in Lausanne, Caos in Campinas Brasil, Industria in Porto, Sonora in Bilbao, Pacha in Munich, Smolna in Warsaw and more.
Oasis in Marrakech, Extrema Outdoor in Belgium, Fort Festival in Tossa/Barcelona, Altavoz in Venice, Elita in Milan, Electrowave in Florence, Fusion in Lärz Germany, Paradise City Festival in Belgium are just some of the festivals she has played over the years.
The start of 2018 saw Giorgia tour in Europe, Australia, South America and United States. She hit the European summer festival circuit playing at Aquasella in Asturias Spain, Kappa FuturFestival in Italy, Fusion in Germany, Pleinvrees in Amsterdam, Rock'n Solex Festival in Rennes, Audioriver in Plock, Sueno Open Air in Aix En Provence, Zurich Open Air in Zurich, Plages Electroniques in Cannes and Amnesia in Ibiza, Epizode in Vietnam, D.EDGE Festival in São Paulo, Warung Tour in São Paulo, Piknic Électronik Melbourne + Babylon Festival + Cafe del Mar in Sydney, Rock'n Solex in Rennes, PYREX ARENA in Santa Cesarea (with Paul Kalkbrenner), Elektric Park in Paris, Electric Castle in the Banffy Castle (Romania).
In 2018 Giorgia was touring US and Canada for the first time, she could play gigs at Output in New York with Kink, Great Northern in San Francisco, Union in Los Angeles, Spybar in Chicago, Treehouse in Miami, at the official afterparty of Movement Festival in Detroit with Maceo Plex, at The Fairmount in Montreal.
Giorgia is currently touring for the 2nd time US (February 2019). She'll play at important festivals like CRSSD in San Diego (main stage!) and The Cityfox Live (with a great selection of some of the best live acts of this planet). Additionally she plays at Flash in Washington, Bijou in Boston, Sound in LA. She'll complete her tour in Mexico with gigs at LooLoo in CDMX, Bar Americas in Guadalajara, Hardpop in Ciudad Juarez.
The confirmed festivals of 2019 in Europe and worldwide are so far (more TBA):
Le Printemps de Bourges in France, TRIBE festival in Sao Paulo, XXXPERIENCE in Itajaí, Baum Park Medellín, Exit in Serbia, Weekend Beach Festival Málaga Spain, Grüne Sonne in Munich, Marvellous Island in Paris, Sandbox in Egypt.
As the years have passed Giorgia has increased her profile and visibility with her engaging online presence, it is no wonder every video she posts goes viral receiving thousands or millions of plays. For a small town girl from Puglia, now residing in Florence, this classically trained musician turned live electronic act is just getting started, so sit back and enjoy what’s to come!