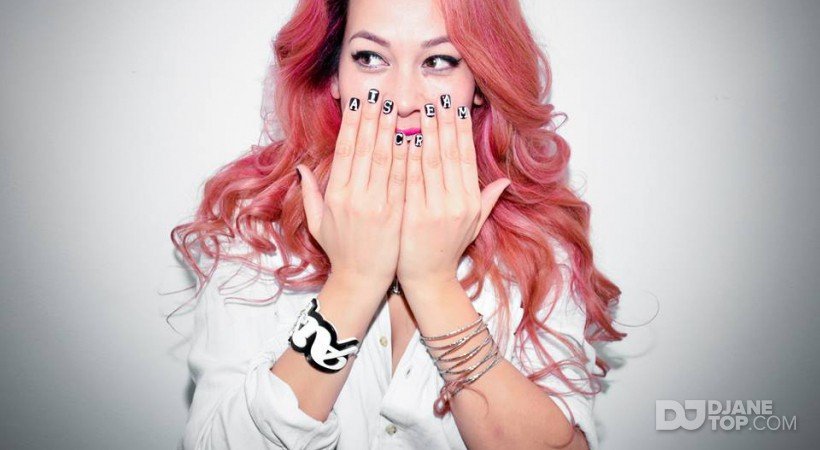 As 2014 marks the ten year DJ-ing anniversary for Aiscream, (Aisa for friends and family) it’s hard to put together a short summary of highlights. But if she is to pick a few, Aiscream mentions: ‘Playing Lowlands Festival 5 years in a row. A crowd of 17.000 at ZiggoDome. Mysteryland Festival. Milkshake Festival. Amsterdam Open AIR. Amsterdam International Fashion Week’.

Not to mention being a regular behind the decks at Amsterdam’s biggest & hottest venues: Jimmy Woo, Paradiso, AIR Amsterdam, Studio80, Melkweg and so on.

Her very first professional hours behind the decks were spent in local well-respected venues such as Winston Kingdom & Dansen bij Jansen. Landing two residencies in her first year of spinning resulted in lots and lots of time to perfect her skills. Nowadays, it’s hard to miss that experience when she is spinning.

Influenced by artists like 2ManyDj’s, Aiscream was one of the first to start experimenting with the style we now know as Eclectic. Ten years ago, mixing a wide variation of genres was not at all common, and Aiscream found great joy in experimenting with this new way of combining all of her favorite tracks in one set. The range of genres that can carry away Aiscream’s dancefloor-approval is wide: from disco, funk, house, pop, hip hop and r&b all the way to trap, twerk, moombathon, drum ’n bass and (indie)rock.

Aiscream easily adapts to her surroundings and has a very fine abillity to read the dancefloor and adjust her BPM’s or genres accordingly.

Music aficionados will definitely appreciate her thorough knowledge of music throughout the years. Profiting from this wisdom, Aiscream mixes her tracks in a creative and intelligent way, not afraid to show off her love for the classics. Growing up as a fan of the more alternative genres, there is an energetic touch to her eclectic style that’s hard to compare to other artists. It’s safe to say ‘expect the unexpected’ when Aiscream hits the decks!

Aiscream’s undisputed second love has always been styling and make-up: resultating in a very photogenic stage-presence.

Besides DJ-ing, Aiscream has hosted a fair amount of parties & festivals herself, collaborating with clubs like Jimmy Woo and beachclub Woodstock69. Not to mention the infamous ‘The Aiscream Karaoke Show’: a tumultuous crazy sing-a-long show which enables Aiscream to show off her perfect entertainer skills besides DJ-ing. Having experienced the promotional and productional side of nightlife, Aiscream understands her role as a DJ very well.